Mexico City is one of the biggest, most diverse, and most remarkable places in the whole American continent, and we can easily see why. With over 350 neighborhoods, it’s also a lovely city to adventure yourself in for a few days.

But what are the safest neighborhoods in Mexico City?

With so many alcaldías (or boroughs), knowing the safest areas to stay in Mexico City can be quickly confusing. For this reason, we’ve gathered all the information you should know before booking your hotel and flying to Mexico.

As a side note, before starting, it’s worth noting that you’ll have to pay a $48 tourism tax when flying to the state of Quintana Roo. While that tax can easily be paid on Visitax, you should take it into consideration when flying to Cancun first before coming to Mexico City.

Just like anywhere else in the world, petty crime often occurs in Mexico City. Sure, the capital city of Mexico has gained a bad reputation over the years due to the few dangerous neighborhoods. But you’ll still be safe in many other areas.

Naturally, watch your belongings, use common sense, and always do your part of research before heading outside the central tourist neighborhoods.

Is Nightlife Safe in Mexico City?

One of the best features of Mexico City is its nightlife, and you’ll find plenty of parties everywhere you go.

But some areas become unsafe during the night, and we recommend sticking to the safest neighborhoods in Mexico City for nightlife: Polanco, Roma, and La Condesa. 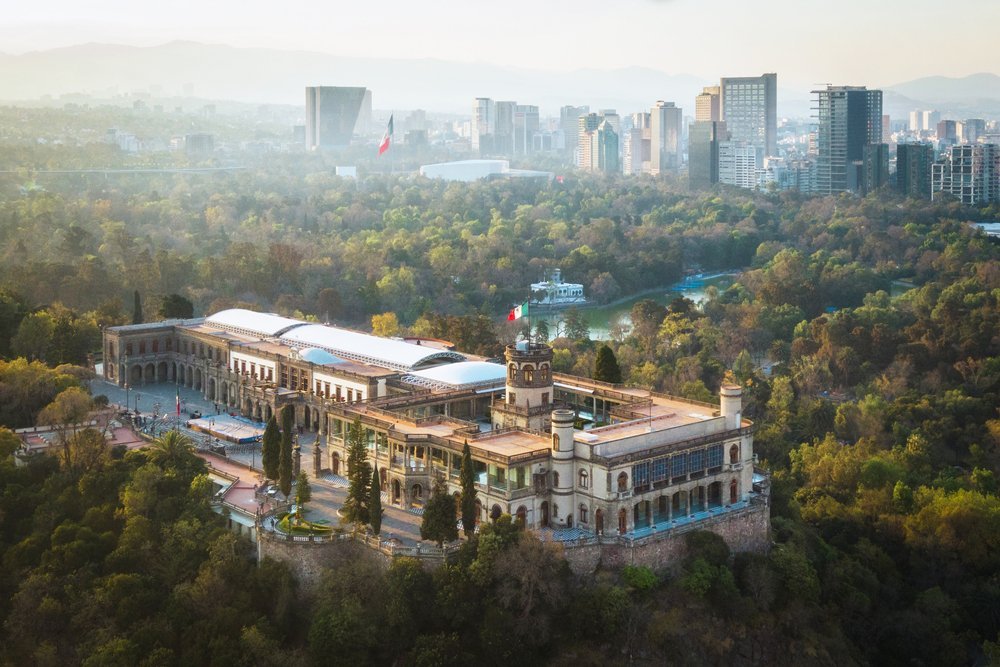 With over 350 districts, you’ll soon be confused about where to stay in Mexico City. But this massive capital can quickly be divided into several areas; let’s elaborate on those.

Bosques de las Lomas is one of the upscale neighborhoods of Mexico City with a sophisticated shopping mall full of cosmetic boutiques, luxury clothing stores, and even international restaurants. Apart from that, you’ll find luxurious condos and office towers with businessmen and women going for lunch during peak times.

Lastly, there is also the Colonia Palo Alto Park if you want to unwind in a relaxing and safe place.

Polanco is another one of the upscale and safest neighborhoods in Mexico City worth visiting or staying at.

The most famous landmark here is Presidente Masaryk Avenue, a prestigious and expensive street with boutique stores like Dolce and Gabbana and the high-end Pasaje Polanco shopping mall.

Apart from that, Polanco is home to Spanish colonial mansions, premium apartments, and interesting museums to visit, like Museo Soumaya and its Rodin collection.

Next on our list is the historic Lomas de Chapultepec. Founded back in the 1920s, it’s one of the safest neighborhoods and home to some of the most admirable mansions in the whole of Mexico City. Some of the worthiest individuals proudly call Lomas de Chapultepec home, and you’ll encounter several embassies as well as delicious restaurants and even the Barranca de Barrilaco Park.

Roma is the hip neighborhood of Mexico City yet, one of the coolest and safest to visit. Other than offering great nightlife, you’ll find great art galleries, the Pabellón Cuauhtémoc shopping mall, and the Ramón López Velarde Garden city park.

Roma is divided into 3 main areas – Roma, Roma Norte, and Roma Sur. Roma Norte is home to many international restaurants like Thai, Irish pubs, Japanese, and even Italian. In addition, Plaza Río de Janeiro park is here, and let’s not forget the Salon of Mexican Fine Art.

Right next to Roma district, you’ll find La Condesa, another of the safest areas in Mexico City. What we particularly like about La Condesa is its exciting and modern vibes, the Avenida Mazatlan and all its different local shops, and the international foods to indulge in.

If you decide to book your hotel here, you’ll also find a Walmart to go buy some groceries or snacks before exploring Mexico City further.

Nestled between La Condesa and Roma Norte, Juarez is a place that you should visit during your vacation in Mexico City. Juarez is home to stunning colonial mansions dating back to the 19th century that you can photograph for your social media. On top of that, Juarez is a special place since it has a Korean community with lots of restaurants and even a Korean supermarket. Needless to say, it’s a special place that you’ll love.

Last but not least, you’ll find Mexico City’s Zona Rosa in Juarez, the gay-friendly area with its unique and friendly community and lots of busy streets and bars coming alive at night.

Other than safety, if you’re looking for a quiet place to stay in Mexico City, then Coyoacan is the one for you. It was formed initially as a rural village; it quickly became the central hub in Mexico City with several districts.

You’ll find endless taquerias and restaurants, bookstores, parks, and pretty much anything else you can think of.

If you want to stay in one of the most alive and safest neighborhoods in Mexico City, then Coyoacan is your best bet.

Much smaller than other areas such as Coyoacan, San Rafael is one of the most peaceful areas in the whole of Mexico City. Unlike Roma and Juarez, the most popular restaurants here are Mexican, which is great to taste the local delicacies before exploring the rest of the capital.

You won’t find very interesting or historical attractions here. However, it’s safe, and you won’t regret coming here for a second.

Located further to the Centro Historico than other districts, San Angel is nonetheless one of the safest neighborhoods in Mexico City. San Angel is a more local area where you’ll find cheap restaurants, a modest shopping mall (Patio Revolución), several parks, and churches.

Is Cancun Safe? What to Do if You Lose your Passport While in Mexico?

How to get to Belize from Cancun?

Things to do in Tulum

How to travel with your pet to Mexico?