Best time to see the whale sharks in Cancún

For any traveler or diver, one of the top must-do experiences is to swim with whale sharks. With their Goliathan size, it’s no wonder that they are on many people’s bucket lists.

Out of all places to see whale sharks and swim with them, one that stands out from the rest is off the coast of Cancún, Mexico. This is where you should be heading if you’re looking for a great place to see them up close.

Mexico has the largest population of whale sharks in all the world. Of course, that is only one reason to travel there.

But when should you travel to Cancún to see whale sharks? And where exactly in Cancún can you spot them?

In this full guide, you will discover where to see whale sharks in Cancún, if you should swim with them, and much more.

How To Get To Cancún, Mexico?

The cheapest way to get to Cancún is by bus, which can be as low as $7 depending on where you depart from.

Also, and obviously, you can fly from every part of the world to Cancún. The route from Cancún International Airport (CUN) to the hotel area/downtown is about 12 miles. It will take around 20 to 25 minutes.

Furthermore, you can also rent a car from other parts of Mexico and get to Cancún while enjoying the panorama.

Last but not least, you should keep in mind that every traveler, no matter the nationality, has to pay a tourism tax equal to $38. You can pay the Cancún tax quickly and easily through Visitax.

Can You Swim With Whale Sharks In Cancún? 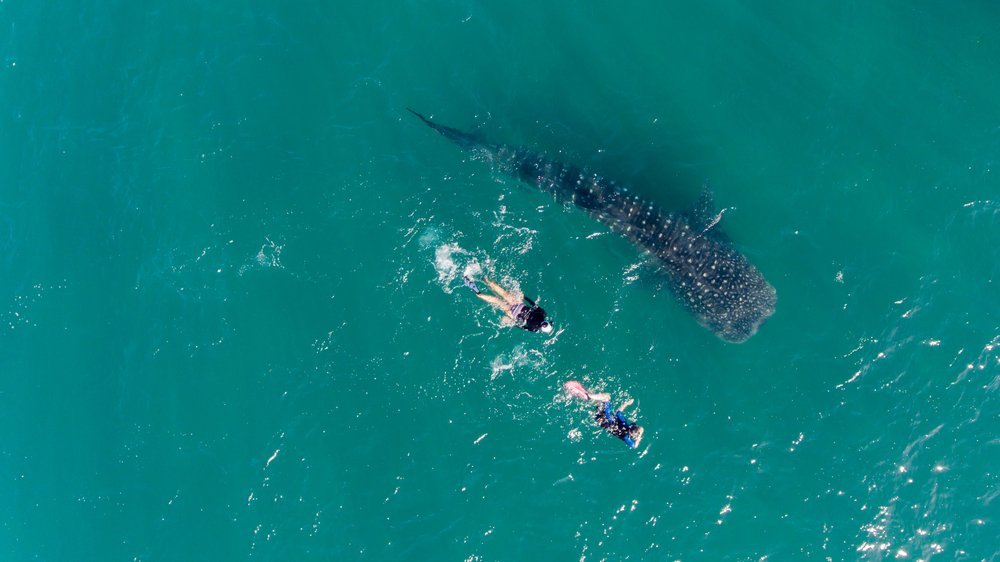 Treat yourself to the ultimate vacation by swimming with whale sharks in Cancún,  Quintana Roo.

Whale sharks are the world’s largest fish (as measured by weight and length) yet they’re harmless and it’s safe to swim with them.

Just remember that these gentle giants should not be touched. In addition, one should stay at least five feet away from the tail for safety reasons.

To sum up, you’re free to swim alongside whale sharks. Look into this once-in-a-lifetime experience when planning your next Mexican vacation!

Is It Dangerous To Swim With Whale Sharks?

Whale sharks eat plankton, small shrimp, and some deep-sea fish. With a diet limited to tiny organisms that we can barely see with the naked eye they pose no risk to humans at all.

They only have an average speed of 3 mph so you’re safe from being eaten alive by one of these giants.

That is to say, swimming with whale sharks off the Yucatán Peninsula (and elsewhere) is not only have an unforgettable experience. It is also a safe encounter that we can’t recommend enough.

Where Can You See Whale Sharks In Mexico? 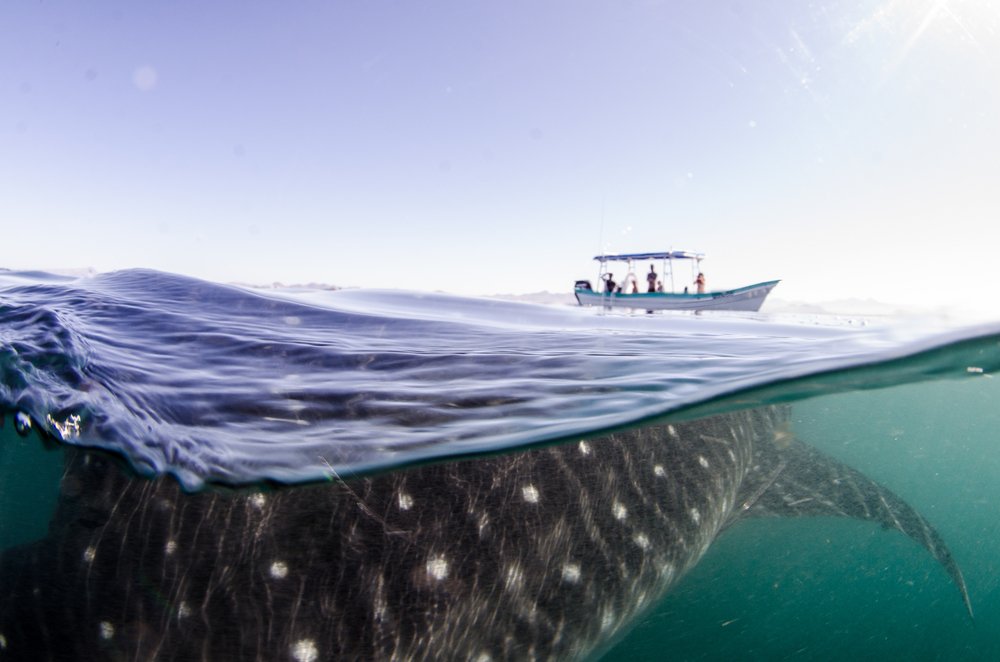 Mexico is home to the world’s largest whale sharks population. And, if you’re planning a trip to Cancún at the right moment, you’ll potentially see dozens of the hundreds present in the Yucatán Peninsula.

We encounter them pretty much all over the Caribbean Sea where there is enough plankton to feed on.

But, apart from that, the Baja peninsula is another great spot to swim with whale sharks, but where you go really depends on what time of year it is.

The best time to see whale sharks is November through May. The whales can be found in Cabo San Lucas, La Paz, and the Cabo Pulmo National Park from October until April.

If you’re not around during wintertime or want an alternative site for viewing these incredible creatures then Isla Holbox is an excellent option. The months to see the whales there are from mid-May to mid-September.

You will be able to enjoy endless activities such as snorkeling or scuba diving. Off the coasts of Cancún, Isla Mujeres, and Holbox are the perfect place for shark enthusiasts to go on a hunt this summer.

We would also recommend taking your seasick medication as the boat from Cancún might make you feel uncomfortable.

Best Time To See The Whale Sharks In Cancun

Whale sharks are a rare occurrence in Cancún. That being said, in the months of July and August, you have your best chance at seeing one.

Whale sharks leave around mid-September making this an excellent time to plan for next year’s whale shark season.

The gentle whale sharks are as beautiful and majestic as they are docile. They come to Cancún, a region in Mexico where plankton is abundant around Isla Mujeres, and Holbox. Right at the parting of the Caribbean Sea and the Gulf of Mexico.

Moreover, there are many available tours that will take you around the Cancún coast to see whale sharks. Starting from $140 to $1400 and more, you’ll have lots of choices for any kind of vacation whether in a couple or with your family.

When Can You See Whale Sharks In Isla Mujeres? 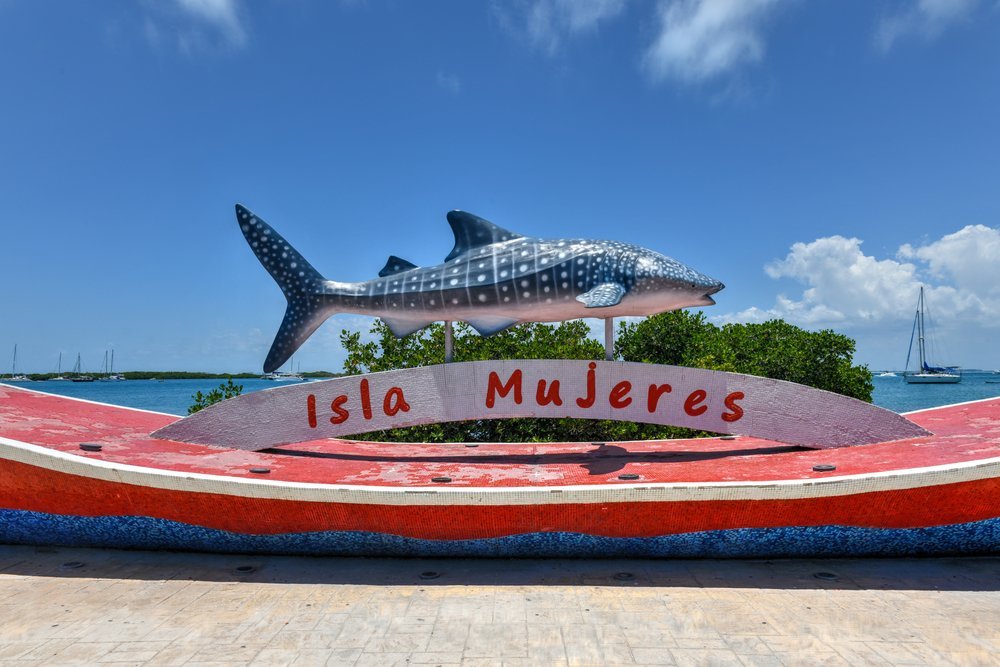 If you’re looking for an adventure in paradise with whale sharks, then stop by Isla Mujeres. The Mexican Caribbean offers the perfect summer vacation and, of course, a chance to swim with them.

The best time of the year for this is between May and September. When temperatures are high enough to attract these gentle giants, but not too hot that they leave.

Also, Isla Mujeres is home to the Whale Shark Festival. This is one of the best events and activities to enjoy the giants in the world.

While swimming with the whales in Cancún is a fantastic experience, going up to Isla Mujeres is a great idea to enjoy the waters. In addition, it is a beautiful island that deserves to be seen.

This was everything you needed to know about seeing the whale sharks in Cancún. Of course, we covered other parts of Quintana Roo too.

The whale shark season is between late June and November. So, be sure to plan accordingly if you want a glimpse of these gigantic creatures.

Of course, seeing the whales in Cancún is one of the best things to do in Mexico. But there are plenty of other activities that will make your vacation worthwhile.

Make sure to take your GoPro or action camera to the tour as you’ll record unforgettable memories to bring back home.

To conclude, get ready for some memorable moments with whale sharks in Cancún on top of your typical archeological sites tours.