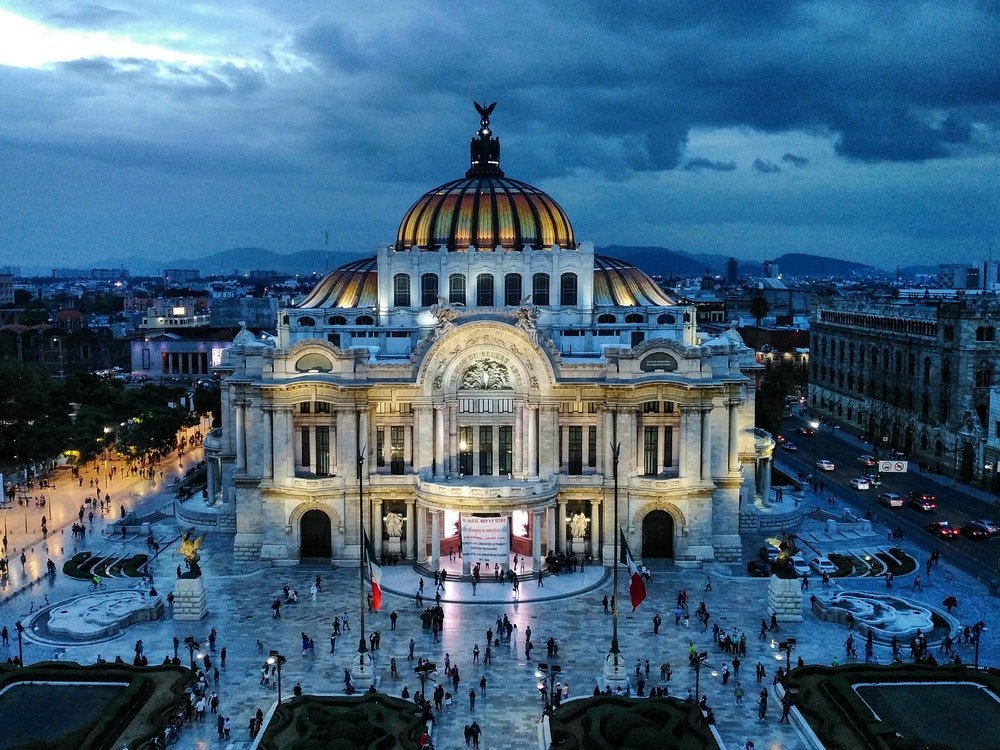 Mexico City is a vibrant metropolis with more than 21 million inhabitants, one of the most populated cities in the world. This means it is a bustling collection of neighborhoods, cultures, landmarks and people that offers everything you could think of.

Built by the Spanish over the ruins of Tenochtitlan, the capital of the Aztec empire, Mexico City manages to combine historical charm with leafy suburbs, modern districts and quirky local neighborhoods. Ranging from the artsy vibe of Coyoacan to the historical Centro Historico and the hip Roma, it literally has something for everyone.

We’ve put together a list of the top 5 neighborhoods in Mexico City that we believe people should visit during their stay. This is by no means an exhaustive list and as always, remember that all large cities have their safer and more dangerous areas, particularly at night. Once you’ve chosen the attractions or neighborhoods to visit, take the time to find out how best to travel there, which roads to avoid and what to be aware of.

One of the larger neighborhoods which has been divided into Roma Norte and Roma Sur, this traditionally residential neighborhood offers an interesting mix between traditional residents and emerging youth culture. Damaged in the most recent earthquake, it has been rebuilt quickly and returned to its popular bohemian vibe. Some may feel it is more of a poorer brother to Condesa, another neighborhood nearby but don’t let this distract you.

You will be able to wander down the street and discover 19th-century mansions, art galleries, bars and coffee shops, as well as charming local markets. One of the most interesting aspects of Roma is its coffee scene, with some delightful little cafes and bars to chill out in. Following in this hipster vibe is the growing number of craft beer options and fancy food halls. All the while, you will often see stunning collections of street art from young Mexican artists.

This is one of the most popular neighborhoods for tourists because it is relatively close to many of the big attractions, as well as a range of transport options. If you’re wanting to travel to Roma Norte then the Sevilla and Chapultepec metro stops are best. Should you wish to get to Roma Sur then aim for Centro Médico or Chilpancingo.

Next on our list of the best neighborhoods in Mexico City is Condesa, located in the southwest of the city. As soon as you step foot in Condesa, you will feel like you have escaped the hustle and bustle of the busiest areas of Mexico City. A middle-class, leafy neighborhood with wide boulevards surrounded by trees, modern buildings and fascinating art deco attractions.

One of the best places to stay and use as a base for your stay in the city, it is particularly popular for its restaurants and other eateries. You will be able to find a whole host of international cuisine options as well as Mexican food outlets, from relaxed lunch places to fine dining restaurants. If you’re wanting to get the metro, then the closest stops are Juanacatlán and Chapultepec.

The main attractions in Condesa, apart from the relaxed environment and dining scene are two beautiful parks. Within the neighborhood is the Parque Mexico which has some interesting street food worth trying, making it a great picnic spot or afternoon out for the family. Close by is one of the biggest parks in the city, Bosque de Chapultepec. This explosion of greenery contrasts with downtown Mexico City and serves as a fantastic balance.

We’re now exploring the most affluent of Mexico City’s neighborhoods, Polanco. If you want to stay at a luxury hotel or spend the day shopping at the designer boutiques then this is the neighborhood for you. For any nervous visitors or first time travelers to Mexico, Polanco along with Roma and Condesa are often seen as the safest neighborhoods to be based in and spend time exploring.

Polanco contains some of the very best attractions and exhibits in the city, including the Museo Soumaya and the incredibly popular Museo Nacional de Antropologia. This burst of culture offers a wonderful balance to high-end shopping and cocktail bars. When evening arrives, you will be treated to some of the very best restaurants in the country, followed by delightful cocktail bars.

A smart, well looked after area of Mexico City you can easily get to the Bosque de Chapultepec park, a vast area of green. It is pretty simple to find your way to and from Polanco, thanks to it only really having one metro station, called Polanco.

We absolutely love Centro Histórico and believe it is one of the very best neighborhoods in Mexico City. Let’s start with the basics – built on the ruins of Tenochtitlan, the Aztec capital it is the nearest to a downtime you will find. It is the historic center and heart of Mexico City. With the Zocalo square as a focal point full of stalls, street performers and tourists, radiating out are streets full of charming architecture ranging from the 16th century up to modern buildings.

Within this neighborhood are some of the well-known landmarks on everyone’s shortlist of attractions to visit. These include:

After a busy day exploring art museums, historical monuments, the huge cathedral and Mexican culture, you will have the option to eat at some stunning restaurants. Our favorites are the traditional Mexican restaurants that offer you a true flavor of the country you’re visiting. The transport links are easy to access thanks to the metro stations at Zocalo and Allende.

A top tip for Centro Historico is to check out what holidays and events are going on during your visit. They will often be celebrated in and around Zocalo square as it is the city center.

We appreciate that Zona Rosa is actually part of the Juarez neighborhood of Mexico City, but it is such a fantastic part of the city that it’s often spoken about in its own right. If you’re looking for a night out on the town and the best places to eat, drink and dance the night away then Zona Rosa is the place to be. It is home to some lovely boutique hotels that mix luxury with style and it is one of the more gay friendly locations in Mexico City.

What many don’t realise is that during the day, Zona Rosa is a great place to explore and spend some time. Walk down the incredible Paseo de la Reforma, take the opportunity to shop or chill out at the many cafes and restaurants. You can even visit Mexico City’s very own Koreatown. If you fancy a bit of culture, then Zona Rosa is home to one of the most famous monuments in the city, Monumento a la Independencia (El Angel) which was completed in 1910, exactly 100 years after Mexico gained independence from Spain.

As mentioned, Zona Rosa really delivers on the nightlife, offering lots of clubs and bars compared to the rest of the city. However, it is important to note that nighttime in some of Mexico City’s neighborhoods can be a little unsafe. Some do class Zona Rosa as one of these places, so be sensible when leaving a bar or club and follow the guidance online.

Other neighborhoods to stay in Mexico City

We really do believe Mexico City has an incredibly diverse array of neighborhoods to choose from, offering anything from fun nightlife to traditional experiences. We couldn’t fit all of them onto this list but to help you explore further when planning your visit, here are some of the city’s best neighborhoods that we couldn’t fit on the page:

We have put together an article of the worst 5 neighborhoods in Mexico City that you should avoid and an example of those include Doctores, Tepito and Iztapalapa. Do your research and find out more about these neighborhoods.

We hope you’ve enjoyed our summary of the best neighborhoods in Mexico City and if anything, it has made you more excited about your future trip to this wonderful part of the world. Mexico City offers such a diverse collection of cultures, architecture, contemporary art and restaurants that you could explore a different place every day for a month and still not scratch the surface.

The one piece of advice that we’d like to leave you with is to do your preparation. Every city around the world has good and bad parts and if you follow the guides and be safe then you can have a wonderful time.

Visitax.us is a private website and is not linked to or can be associated with any government agency. Visitax.us assists travelers in paying the Quintana Roo’s state tourism tax. Our fee is 38 USD and includes the government tax of 11 USD.