Scuba diving and snorkeling, while not for everyone, can be amazing adventures, especially in Mexico. However, if you’re a landlocked adult who never had their feet wet before – the Atlantis Submarine tour might just be what you’re looking for.

Passenger submarines are open to both the adventurous ones and newbies to offer a stunning glimpse into the Mexican underwater world.

Needless to say, Cozumel is a part of paradise on Earth, and joining the Atlantis Submarine tour is a must on the island.

Read below to know more about the tour, the inclusions, what to bring to the submarine tour, and more.

What is Included in the Submarine Tour?

The most important part of any tour is the inclusions. Of course, these vary depending on the tour and the company you choose to travel with.

First of all, the tour lasts around 2 hours and the trip underwater will be 40 to 45 minutes long. This is because the submarine will need to reach the deeper waters in order for you to see the most beautiful and interesting marine creatures.

Also, complimentary fruit punch and rum punch is usually provided on the tour.

Last but certainly not least, you’ll be given a dive certificate at the end and that’s definitely something to remind you of the experience back home. 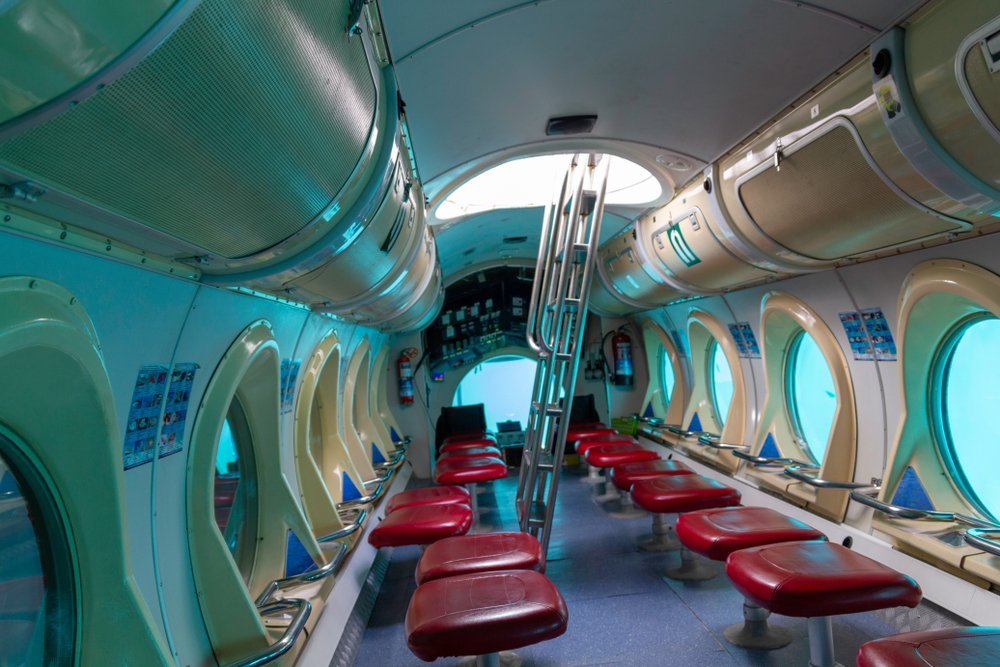 What is Not Included in Cozumel Submarine Tour?

Just like any tour, not everything is included. You’ll need to take care of the following by yourself:

On top of that, whether you’re coming from the States, Canada, or anywhere else, a $38 tourism tax has to be paid upon entering Quintana Roo. It is a simple process that can be done in a few clicks on Visitax and can be prepared ahead of time before reaching Cancun.

Is the Atlantis Submarine Tour Safe?

The Atlantis submarine tour in Cozumel was specifically created to safely cruise the beautiful underwater world around the island.

Of course, we understand that you might be scared of going into the unknown if this is your first time. However, Atlantis is one of the safest submersibles out there with no incidents in its history since 1999.

The Underwater Creatures to See in Cozumel

One of the first things that come to your mind when thinking about going on a submarine into the Mexican waters is the fish and marine creatures. It goes without saying that, within the 45 minutes of your trip, you’ll be greeted by stunning underwater life.

First of all, you’ll be able to see the impressive natural coral reef around Cozumel, which is the second-largest in the world. Other than its size, the colors of it will astonish you, to say the least.

In plain words, you will spend a magical moment witnessing the marine life in Mexico whether it’s your first time or not. What to Bring to the Atlantis Submarine Tour in Cozumel

Be prepared to spend a couple of hours in the sun as well as in the submarine with a full outfit. These are the must bring when joining the Atlantis Submarine tour in Cozumel:

In short, joining the submarine tour doesn’t require you much more than a normal day at the beach.

Itinerary of the Atlantis Submarine Tour in Cozumel

We’ve been through the main activities of the tour, but let’s now elaborate on the itinerary step by step aboard the submarine.

Once in Cozumel, you’ll be sent to the Chankanaab Dive Site, a few minutes from the pier, where the Atlantis submarine is located.

After departing, you’ll be able to explore the underwater world around you and see a large number of exotic fish such as grunts, groupers, parrotfish, and, of course, the stunning coral reef.

Other than the Captain maneuvering around into the waters, he will also mention all the details during the tour. That is to say, that’s another great reason to love the submarine trip in Cozumel.

Where Does the Submarine Tour Start in Cozumel

The Atlantis underwater tour starts at the office itself on Rafael E. Melgar Avenue in San Miguel de Cozumel. It is strategically located near the pier at a 10-minute walk.

Also, you’ll find many restaurants to enjoy some delicacies before or after the tour, which is certainly a great addition.

Whether you’re coming to Cozumel in the early morning or the day before the trip, you’ll still be able to join as several trips start during the morning. In fact, from 9.00 AM through 12.00 PM, there will be a new tour starting.

How Long is the Atlantis Submarine Trip?

Be prepared for an underwater adventure like no other in Mexico. You’ll be submerged about 100 feet below the surface and explore a 25-acre natural coral reef in an air-conditioned seat.

The Atlantis submarine tour lasts in total 2 hours with 40 to 45 minutes spent underwater. While this doesn’t sound like much, it’s actually more than enough to enjoy the most beautiful and unique marine life around.

Final Thoughts on the Atlantis Submarine Tour in Cozumel

The Atlantis Submarine Tour in Cozumel is one of the most amazing trips you will ever be part of. Other than being a fascinating experience per se, it’s something that you will never forget for numerous reasons.

If you’re visiting Mexico, specifically Playa del Carmen or Cozumel, make sure to book it to experience one of the best experiences in Central America.

In conclusion, the Atlantis Submarine Tour in Cozumel is an exciting experience for tourists and locals alike and you can’t miss it before leaving.

What’s the best way to explore Cozumel? Without a doubt, you have got to do it while inside of a submarine. It doesn’t get any cooler than that!

6 of the Best Scuba Diving Sites in Mexico

What to Do if You Lose your Passport While in Mexico?